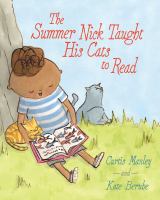 The Summer Nick Taught His Cats to Read

Please see "Summary" for a full review of this book.

Love this wonderful, inventive book! Verne and Stevenson are just the kind of cats a reader wants as feline friends! It takes Stevenson awhile to come around, but that's the fun of the story!!!

Learning to read is hard... especially if you are a cat. Journey with Nick as he determines what his cats are interested in reading, visits his local library, has lots of adventures, and finally teaches his cats how to read. Beautiful book about a persistent boy and the cats he loves.

Verne, Nick's cat, is enthusiastic about reading words and the captivating world of story. This cat even gets his own library card (and borrows so many books)!! Stevenson, Verne's other cat, isn't quite taken by the written word. When Nick discovers Stevenson's drawings and becomes aware of his cat's fascination with pirates, Nick learns that Stevenson just wasn't being presented with stories that sparked his interest. A delightful read-aloud for emergent readers, and book lovers of all ages. Berube's art is absolutely charming!

This book is extremely adorable and a little unexpected. With charming characters, both people and cats, you'll find much to enjoy in this book about reading, finding your own groove, and being a good friend.

As a cat lover, this book is adorable. Stevenson is the grumpy cat that will stick in your heart forever! It's a marvellous story of how even the most disinterested can find a love of reading if you just ask "What are you interested in?"

Nick and his two cats, Verne and Stevenson, were the best of friends and they did everything together … except reading.
Nick enjoyed stories so much that he was sure the cats would enjoy them too. He decided to teach them to read.
However the cats had other ideas.
Nick began with easy words in large print. Verne and Stevenson paid no attention. They just wanted to play.
At lunchtime Nick tried to teach the cats words about eating. The cats ignored him. They just wanted to eat. Later when he tried to teach them the word “nap”, they fell asleep.
The next day, Nick printed some words on pieces of paper which had been cut in the shape of fish. Now Verne was interested … but not Stevenson (who just said “Mrrp” and crawled under the bed).
As Nick introduced more words about fish - and food and cats - Vernon began to learn about letters and sounds. He struggled at first, but persevered. When he had mastered words, Nick started to read him stories. Soon Vernon could also read stories for himself!
But Stevenson still wasn’t interested, even when Nick and Vernon went off to the library for more stories to read.
Was there anything at all that could turn Nick’s grumpy, reluctant cat into a reader?
This totally endearing, amusing and quirky tale happily celebrates the joy of reading and the power of the imagination.
** Recommended for ages 3 to 7 years of age.
** Reviewed by Sally Hengeveld, librarian, Stratford Public Library.

There are no ages for this title yet.

There are no notices for this title yet.

There are no quotes for this title yet.

Find it at MAPL